So last we spoke I had chosen to use Neomailbox.com as my new email host. It was a snap to setup my email address with them: I simply had to change two IP addresses where I bought timschwartz.org and the folks at Neomailbox took care of the rest. They have a nice webmail client and I haven’t had any speed or connection issues receiving my email or connecting to their website interface based in Switzerland.

In addition to a new email host, I had to choose a mail application to run directly on my computer, not only to enable encryption, but also for the initial transfer of data from my old host (gmail) to my new host (neomailbox). I’ve selected Apple’s Mail for this.

Okay, if this project was about how to get off of Apple products I would be screwed, but luckily I’m only trying to extract my data from one large company at a time!

On my laptop I originally intended to use Mozilla Thunderbird as my mail client, but unfortunately last year the project was stopped by Mozilla and they are now just intermittently releasing security fixes. This was quite disappointing simply because I wanted to pick an application to work with for at least five years (I don’t want to migrate large amounts of data all the time). So I went to surveying other mail clients and Sparrow was supposed to be very good, but it was shut down and acquired by Google last year. Ho hum. This left me with some small software companies, Microsoft Outlook, or Apple’s Mail program. I went with Mail simply because I’ve used Macs for 15 years (more on this later, but for me it’s about having your cake and eating it too, I heart *nix plus I use Photoshop/Premier/InDesign…) and I assume Apple’s Mail program will be around for a while to come. 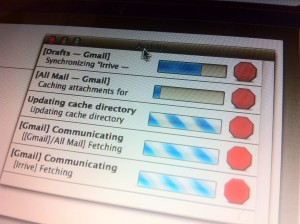 For migrating data between email providers, you simply connect both accounts to a mail program and then slowly, batch by batch, move messages over to the new server. Unfortunately, because I’ve used Gmail for seven years, I’ve never thought about deleting a single email and I’ve never worried about the amount of data I’ve been storing. I was up to 18Gb of email. Through selective weeding (mostly anything with “unsubscribe” in it or large attachments I didn’t need), I was able to whittle this down to ~13Gb. My plan from this point on is to archive emails from 2006-2011 locally on my Mac and move 2012 and 2013 emails to the new server. In order to do this in an orderly fashion, I made new labels in Gmail for each year between 2006-2011 and moved the emails to their respective boxes. Then in the Mail application I’ve been able to export each folder and then import it into the Mail and put it in my “Local Mailbox”, which just means stored on the computer.

This has been a huge PITA because there is so much data. I’ve had to setup a separate computer to just download and migrate my mail for days and days. The computer is currently on day 3 and I hope the migration will be finished by day 5. Nothing to do but sit around and watch the Mail program do its thing.

This post from dataliberation explains the whole process- please feel free to contact me if this step is driving you insane.